How is Dhan Vapasi different from a UBI?

Dhan Vapasi is not UBI. It will ensure that every citizen of India gets their rightful share of the national wealth without any increase in the tax rates.

For the uninitiated, UBI refers to a Universal Basic Income, an idea that has gained renewed traction in the last few years across the political spectrum. It refers to a modest amount of money paid unconditionally to individuals on a regular basis (e.g. monthly, annually). UBI is –

The application and relevance of UBI is being debated around the world, including India. The 2016-17 Economic Survey included a chapter on the possibility of UBI in India.  However, with the current revenue collected by the Government of India, it’s not possible to distribute a significant “income” to the citizens. Lot of economists and researchers including Vijay Joshi, Reetika Khera, Pranab Bardhan as well as the Chief Economic Advisor himself, have worked on a UBI proposal for India. In all their proposals, they suggest the funding of UBI by cutting back existing subsidies and raising the tax base. In a few of the proposals, the universality of UBI is questioned and it is only meant for the poorest; effectively rendering the U of UBI meaningless. 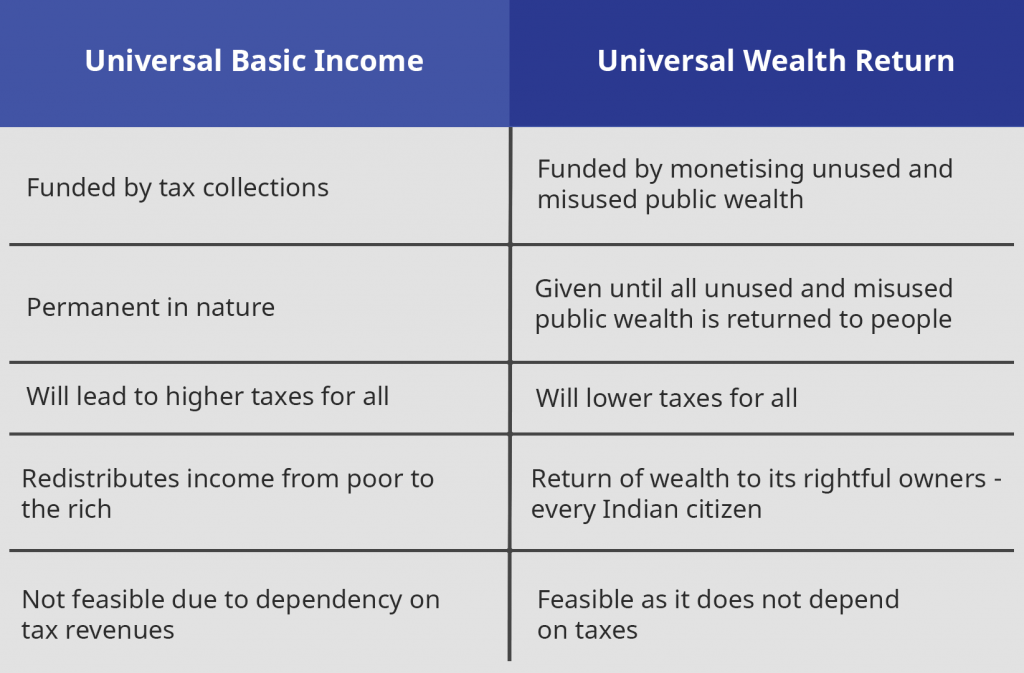 Even if a basic income is only to be provided to the poorest citizens, the targeting won’t be easy and will either see the benefits accruing to a lot of well-off people or being deprived from the ones who live in abject poverty. We have seen this time and again with the various welfare schemes operated by all governments, both at the state and the central level since independence. For example, the benefits of the Public Distribution Scheme are regularly missed out by people who desperately need subsidised ration due to issues related to documentation, lack of access, corruption, etc.

Dhan Vapasi is not a form of UBI but UWR – Universal Wealth Return. It will ensure that every citizen of India gets their rightful share of the wealth of the nation without any increase in the tax rates.

The way we have designed the entire process ensures that the money being given to the people is through the sale of the surplus public assets, NOT by the means of increasing the tax rates. The money will be given to ALL the citizens, without any exception since all of them collectively are the true owners of the surplus public assets that are being auctioned under Dhan Vapasi.

Read more from our daily section.