Is India Poor Due to its High Population?

Many Indians think that our country is poor largely because of high population. In fact, most of us are taught in schools that high population causes strain

Many Indians think that our country is poor largely because of high population. In fact, most of us are taught in schools that high population causes strain on resources and keep us poor. Can you believe that? Are you and I, the people, are the reason for lack of prosperity in India? But is it really the case, let’s look at some evidence to examine this claim.

To see if population is really a cause of India’s poverty, we collected some data from the 2011 census and the Reserve Bank of India. The most populous state in India, Uttar Pradesh, is also one of the poorest. But Uttar Pradesh is huge, their population may be large but so is the area. The right measure to use here would be population density – the average number of people per square kilometres. For determining whether a state or union territory is rich or not, we took the per capita GDP of the state from the Reserve Bank of India.

Read more from our daily section

The data shows no relation between population and poverty. 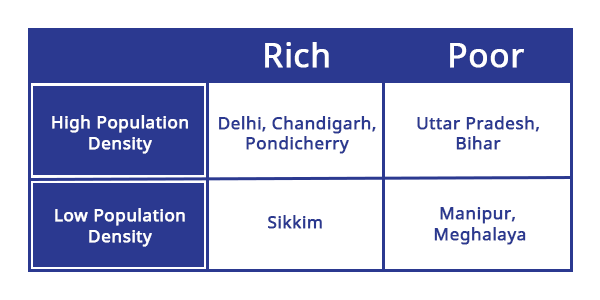 Here is the whole table arranged by population density for your reference;

Do you still think high population is the cause of India’s poverty? Please let us know in comments.